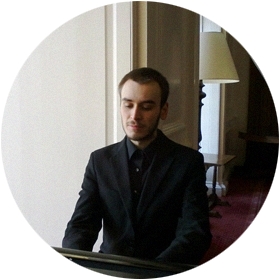 Accomplished professional pianist and Registered Private Teacher with the Incorporated Society of Musicians. Tuition available in person (in Brentwood town centre) or online (via Zoom or Skype).

MUSIC: [for information about my approach to teaching, please scroll down to the section on "Experience"]

As a performer, I am highly experienced as a soloist, accompanist, ensemble player, and classical improviser. Since November 2019, I am the regular pianist for the London New Wind Festival. I have experience of performing in many contexts, from informal background music to full concerts, from the theatre-pit to the most distinguished stages, from solo recitals to concerto appearances, and chamber music. Venues at which I have performed include the Amaryllis Fleming Concert Hall (Royal College of Music, London), West Road Concert Hall (Cambridge), and the Wigmore Hall (London).

After having attained ABRSM Grade 8 whilst still at primary school, I entered the Royal College of Music Junior Department in 2003, where I studied under Emily Jeffrey and Helen Leek. I developed a diverse repertoire, from Bach and Scarlatti to my own compositions and pieces written for me by other living composers. My contribution to the performance of student compositions elicited the Constance Poupard Prize upon the conclusion of my studies there in 2010.

I then matriculated at Girton College, University of Cambridge, where I read all three parts of the Music Tripos, a broad undergraduate course with a rigorous theoretical focus: elective specialisms undertaken include Fugue (4-hour paper) and Advanced Keyboard Skills. Through my studies for the Advanced Keyboard Skills paper and my involvement with numerous concert projects, I developed proficiency in other keyboard instruments, including harpsichord, chamber organ, and harmonium. I also had the privilege of performing with the distinguished musicians associated with Girton College, including Dr Martin Ennis, Nicholas Mulroy, and Andrew Kennedy. During my undergraduate studies at Cambridge, I was awarded the Girton College Music scholarship (in 2010) and won the Alkan competition (in 2013).

I then commenced (in 2013) postgraduate studies in composition at the Guildhall School of Music & Drama, where I seized the opportunity to refine a lexicon for classical improvisation through studies in the Centre for Classical Improvisation and Creative Performance, under Prof. David Dolan and Simon Gilliver. After a year on the postgraduate Interpretation through Improvisation elective (which included a collaborative project with actors), in which I obtained a high distinction, I undertook, by invitation, a further year of advanced studies with Prof. Dolan.

Since leaving Guildhall in 2015, I have developed a thriving portfolio career, at the crux of which lies my academic research. I continue to be in demand for performing and teaching in various contexts within and beyond academia, including: giving lectures across three different courses at the University of Glasgow; accompanying examinations and auditions, often sight-reading the part; and performing three world premières as a harpsichordist with the Royal Scottish National Orchestra in a chamber concert.

MATHEMATICS: I teach up to & including A-level (including pure, mechanics, and statistics modules) in all examination boards.

I have A* in both A-level Mathematics and Further Mathematics (having studied C1-4, FP1-3, M1-3, and S1-3), and also qualified for round 1 of the British Mathematical Olympiad, twice (in the December 2008 paper, I scored 26, only one mark short of what was needed to qualify for round 2). Although I specialised in music at university, my research interests include pitch-class set theory, a highly mathematical taxonomy of music analysis (it is related to various facets of combinatorial/set theory).


Availability: The best times for teaching from my perspective are weekends. Weekdays are possible, but the day/time may then need to vary from week to week. This is because I have a thriving portfolio career that encompasses academic research and performance engagements. I operate on a ‘pay-as-you-go’ basis, which means that you are *not* obliged to have a lesson every week.

There will be a travel surcharge for lessons more than two miles away (as the crow flies) from Wilson`s Corner (the intersection of the A128 and the A1023) in Brentwood town centre.

Experience: I have experience in teaching pupils of all ages and abilities, including adults. As an academic, I have devised and delivered lectures across three courses at the University of Glasgow. As a professional performer and composer, I can teach both the practical and academic facets of music to an expert level (I also teach A-level mathematics). With over a decade of experience working with musicians of all abilities as an accompanist, I have an understanding of how to teach from a more holistic angle, in addition to the matters of technique that form the basis of instrumental teaching.

Teaching is not about telling the pupil what to do: it should involve attuning him/her to perceive his/her own strengths and weaknesses, and to appreciate the demands of the subject matter. In practice, this means that the teacher must resist the temptation to simply point out errors and immediately cite the "correct" solution instead, the teacher must draw to the pupil`s attention the erroneous matter at hand and guide him/her (with a few carefully chosen words and gestures) towards understanding for himself/herself what he/she needs to do, and why. It is my belief that a pupil learns far more by spending two minutes scrutinising an issue that the teacher has brought to his/her attention, than by being told in two seconds, "X was wrong it should be Y". In other words, I believe in teaching pupils to *understand* a concept, so that they can perform to the best of their ability under pressure.