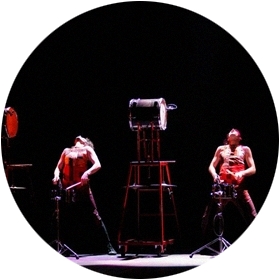 This tutor has provided no information about subjects

I love teaching and I consider teaching as a very important part of my work. I believe that 95% of the time we do not need teachers because we can actually teach ourselves. Therefore, I see my role as a teacher as someone who inspires and reminds students of what to look for within themselves. And believe me, there is plenty to find!

My experience ranges from master classes and clinics in recognized music institutions and universities around the world to private classes in my own studio.

It is always exciting and refreshing to meet and share ideas with people who have curiosity and passion for music, rhythm, drums and life and I am very proud to have several students that continued with music to a professional level.

My main goal is to create a path in which a student or audience can find a relaxed and inspiring space for the body and mind to explore their own musicality. I truly believe that in this way musicians can develop their skills and find a way to express themselves with their own voice on their instruments, and that as audience we can develop a much better listening.

If you are interested to take a walk on this path, I’ll be more than happy to hear from you.

Experience: Born and raised in Haifa, Israel, Yaron began playing the drums at the age of 15 winning the country’s national Telerock Competition in 1993 at the age of 18.

After several years of work as a freelance drummer in the Israeli music scene, Yaron met the tap artist Sharon Lavi, with whom he created the show Keshev Ketzev,. The show toured extensively in Israel to audience and critical acclaim. Following the success of this collaboration, they formed Tapeplas, a company that combined tap dance, music and rhythm in Barcelona, Spain where they successfully produced the shows BoomBach, Monkeys and Epic, with Yaron as Musical Director and Composer.

Since 2004 Yaron has been collaborating with the world acclaimed choreographer Hofesh Shechter. Yaron took part as the lead drummer, arranger and Musical Director in the research and creation of several works of the company including Uprising, In Your Rooms, Political Mother (as well as the Choreographer’s Cut productions) and Survivor and has been touring with the company around the world.

Currently Yaron also plays drums, percussion and vocals in Kindle Trails, a new folk-rock band, which was formed in 2011.

A very important part of Yaron’s love for music lies with teaching and he has delivered workshops and master classes for musicians and dancers in the UK, USA, Japan, Spain, Israel, South Korea and New Zealand.