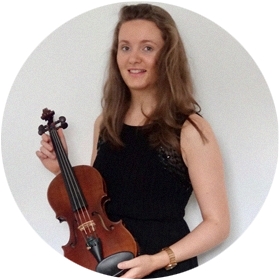 Susanna is a Northern Irish violinist studying at the Guildhall School of Music and Drama with Simon Blendis, generously supported by a scholarship and a Help Musicians Postgraduate Award. She studied at the Royal Northern College of Music with James Clark and Gina McCormack and graduated with First Class Honours BMus (Hons).

During her time at the RNCM, Susanna successfully auditioned for the Professional Experience Schemes of both the BBC Philharmonic Orchestra and the Ulster Orchestra, performing in concerts at the Bridgewater Hall and the Ulster Hall, live on BBC Radio 3. In 2019/2020 Susanna was appointed leader of the RNCM Symphony and Opera Orchestras and had the opportunity to lead the orchestra during their residency at the Cantiere Festival in Montepulciano, Italy. Susanna has also participated in masterclasses with Mauricio Fuks, Jennifer Pike and Levon Chilingirian.

As a chamber musician, Susanna enjoys performing with the Manchester based Aminta Quartet. The quartet were invited to perform in the RNCM Spotlight Series and Chamber Music Festival. Susanna has received coaching from Donald Grant, Leonard Elschenbroich and Petr Prause. As part of the RNCM Strings Festival, she performed alongside the Elias and Benyounes Quartets and was a finalist in the RNCM Nossek Prize for Chamber Music.

In 2019, Susanna was selected for the Camerata Ireland Academy at the Clandeboye Festival in Bangor, where she played in masterclasses with Elina Vahala. Earlier that year, she also participated in the Irish Chamber Orchestra Academy. As leader of the Ulster Youth Orchestra in 2017 and 2018, she was awarded the Milton Violin Award by the Arts Council of Northern Ireland and toured to Vienna and Bratislava with the orchestra. As a former member of the National Youth Orchestra of Great Britain, Susanna has performed in prestigious venues including the Royal Albert Hall at the BBC Proms.

A keen performer of contemporary music, Susanna was chosen as the Hard Rain Soloist Ensemble`s Young Artist in 2018, appearing in concerts with the ensemble and performing a solo recital at Queen`s University, Belfast. Susanna has also featured as soloist on BBC Radio Ulster.

Experience: I have taught private violin and piano lessons for three years with children aged 6-16 years. I also have experience with group teaching doing a professional placement with the National Children`s Orchestra of Great Britain and taking orchestra rehearsals in my school.