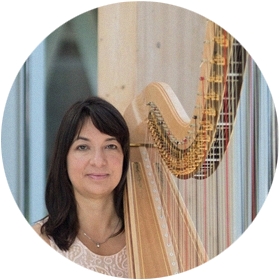 Feedback Score:
+4
Member Since: 01/11/2019
Last Login: 14 months ago
Response Rate: no data
Expected Response : no data
Not available to contact

Award winning harpist with a eleven year teaching experience, looking forward to pass along the passion for music and the harp.

Whether it is in preparation for ABRSM/ Trinity College Music exams, college entrance auditions, simply because you always wanted to learn how to play the harp or you just want to give your child the beautiful experience of studying this instrument, I would be delighted to hear from you.

I have been teaching music and harp in New York, Spain and the UK for over a decade. Listening to every student`s needs, I plan on developing my students` musicianship. I am delighted to offer one on one and group lessons, chamber music coachings and feedback on how to compose for the harp. From delivering masterclasses for the American Harp Society in the USA and being a harp tutor to 14-16 pre-college students in a music conservatory in Spain to working with the elderly, at risk youth and primary school children in the UK, I am a reliable, honest and dedicated teacher always empowering my students. I hold a private studio and also teach at a music school. This past November, my students got Distinction in their ABRSM exams.

Availability: My schedule is flexible and I can adapt it to fit in your most convenient lesson time.

Experience: Irantzu has recently won the Aixe Getxo 2020 Prize in Classical and Contemporary Music. Described as "a sensitive chamber musician as well as a virtuoso soloist" by the New York Concert Review, Irantzu has played as a soloist at the Spoleto Music Festival in Italy, the Weill Hall- Carnegie Hall in NYC, the RioHarp Festival in Brasil, Casa de America in Madrid and at the Old Theatre Royal in Bath.

As a chamber musician she has intensively performed in NYC and Spain, where she was a founding member of the Belle Epoque Ensemble for contemporary music. An advocator of contemporary music, she has premiered more than 40 pieces for ensemble and solo settings, most recently Paul Burnell’s Robot Picking Raspberries. Her performance of Technicolor for Harp and Electronics by Angélica Negrón can often be heard at the WQXR, the free radio of NYC. As a member of the Olyver New Music Collective, Irantzu premiered Pastoral Dream, a harp trio by M. Olyver, at St. James’s Church in London last September.

After discovering the multidisciplinary performances during her studies at New York University, Irantzu started using literature and images in her performances, including: Notes on Words, her NYC Debut recital at Weill Hall -Carnegie Hall, Reflections in Spain, Merriment at the Artist Residency at Skimstone Arts in Newcastle, Illusions in High Wycombe with Violinist Dr. Sabina Rakcheyeva and Dawn of Shadows and Scintillation at the Fringe Festival in Bath presented by The Old Theatre Royal.

Irantzu has been a teacher for eleven years and she very much enjoys introducing the harp to all the communities. Her storytelling harp performance for children has been presented at The Oliver House School in South London as well as by The Little Concert at Canary Water Studios and Richmond. In mid October, she took part at the Oliver House School Fall Concert for children.

Originally from the Basque Country, Spain, Irantzu studied at the Reina Sofia Superior Music Conservatory in Madrid, at The Juilliard School (Bachelor’s and Master’s Degrees) and at the New York University (Advance Certificate in Music Education). Her studies were possible thanks to the financial support of various grants, among them: the Fulbright Fellowship and the Nicanor Zabaleta Scholarship. International prizes include: Best New Artist of the Year by Cultura Viva Association in Spain, First Prize at the Superior Category of the UFAM International Harp Competition in France and First Prize at the Artist International Special Presentations Awards in New York City. Irantzu is a harpist for Music in Hospitals and Care.

We have a total of 4 review(s) for Irantzu.

Iranzu is a wonderful and patient teacher. I haven`t played the harp for over twenty years (and had never played a lever harp before) but in just a few weeks I feel I have made more progress than I did in 5 years of lessons at school and in contrast to then, I am enjoying the experience! Irantzu is an excellent teacher and is extremely kind and flexible with me, making the lessons a joy to look forward to, rather than a chore. I`d recommend her to anyone.

Thank you very much Cathrin! It is my pleasure to work with you and I am amazed by how quickly you are advancing. You are an ideal student with in-depth questions, focus and a clear progress through out the lesson. Beautiful playing in today`s lesson. Looking forward to hearing you next time. Best wishes.

Irantzu is a wonderful teacher. She is kind and gentle and very clear in her explanations. She is very patient, positive and warm. I highly recommend her as a teacher.

Dear Nora,
Thank you very much for your beautiful words. It is my pleasure to work with your daughter. She is quick and uses her ear to guide her.
I am very grateful to you both for having me.
Looking forward to our next lesson.

It has been such a pleasure to work with Irantzu. I contacted her to give some harp lessons to my father as a birthday surprise. Her correspondence has been professional and timely. The care she put in to the time with my father has been evident and he`s been so happy to learn from her expertise. I highly recommend Irantzu!

Thank you very much for your beautiful words Anna! It is my pleasure to work with your Father, who is a marvelous student and a dedicated musician. Looking forward to our next lesson xoxo

Very great tutor - She is professional, gives honest feedback, her tips are very useful and she makes sure you push yourself go do your best. She gives useful resources which are currently helping me to improve not only my skills but also my knowledge. Thank you Irantzu!

Thank you very much Irene. It means a lot to me.
It is great working with you and see you progress week by week. Keep doing what you are doing and it is my pleasure to guide you through the music and the harp. See you next week.