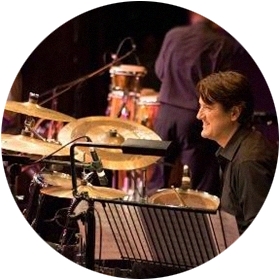 I have played the drums professionally for over 20 years and he enjoys a busy schedule on the London gig circuit as well as performing all over the UK. Mostly booked to play jazz, I am equally at home playing other genres, such as rock, pop and Latin music. Over the years, I have performed at some of the top live music venues in London, such as Ronnie Scotts, Pizza Express Jazz Cub, The 100 Club and countless other venues as well as many music festivals around the UK, including the Isle of Wight Jazz and Blues Festival, Edinburgh Festival and Ealing Jazz and Blues Festival. I also get booked for studio sessions from time to time, an environment I thrive in.

Availability: Mornings and afternoons most weekdays, plus some evening availability.

Experience: As well as being a professional performing drummer, I teach the drum kit at Hemel Hempstead school as well as two other schools through Enfield Music Services. I also cover drum tuition at Dwight International School. Over the years I have taught at numerous other schools, such as the New London Performing Arts Centre in Muswell Hill, North London. Many of my students have taken grades for drum kit, usually resulting in either a Merit or a Distinction. The accredited systems I am most familiar with are Rockschool and Trinity Guildhall. I possess a current DBS Disclosure as well as a Child Protection Certificate.