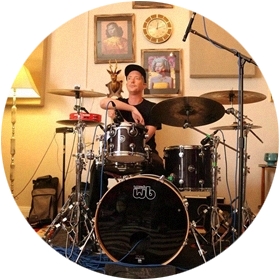 I am an accomplished drummer with over 12 years experience. I regularly play full kit, Cajon, Djembe and Congas. I have wide ranging experience in originals bands, function bands and recording sessions. I also have over 3 years sucessful teaching experience. I am able to give constructive creative input into my work and enjoy being part of a team. I have a strong work ethic and love a challenge.

My work has achieved the following:

AS and A2 Levels in Music Technology – Stanground College Peterborough

Conducting masterclasses for groups and individuals to develop their skills in drumming, performing and song writing
Adding value to the existing music curricula in the areas of performance, rehearsal, song writing techniques
Giving the students a taste of what is required to be a working musician

Full clean driving license. CRB checked. From the age of 7, I participated in competitive team sports, and from the age of 12, I competed in team sports internationally, representing provincial and national teams. This has made me into a highly successful and motivated team player. As a teenager I competed in team sports at a relatively high level (Cricket and Soccer First Team) and represented my country at both Inline and Ice Hockey in the junior levels.

This user has a total of 7 images, view them all in their Photo Gallery .