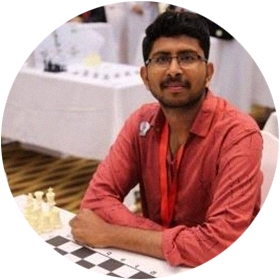 Feedback Score:
+1
Member Since: 22/05/2020
Last Login: 11 months ago
Response Rate: no data
Expected Response : no data
Not available to contact

Coach at Kings` Chess Academy with 11+ years of experience. Handled the entire academy in all the aspects
including recruitment, finance, marketing and training to the coaches. Able to produce commonwealth champion
from our academy. Has produced many numbers of FIDE and USCF rated players from our academy.

Experience: Experience as a Coach
June 2013 till now Coach and Partner at Kings’ Chess Academy, Hyderabad & Master Minds Academy,Muscat
Has been working as coach and partner at Kings’ Chess Academy. As a coach was successful in producing many fide rated players and students winning top 10 in age group nationals from our
academy.
May 2008- May 2013 Self Employed coach at Kakinada
Worked as a part-time coach at my hometown in B- tech and was successful as a coach as students won many district states and gained their fide ratings later on.
• Certified as FIDE Instructor (licensed trainer by world chess federation)
• One of my students, Karthik Sai won commonwealth Under 12 title
• Kheerthi Ganta got Gold Medal in Blitz & Bronze Medal In standard play, Karthik Sai got Silver Medal in standard Play, Havish got Silver Medal in Rapid Play, Suhaas secured 4th Place in Standard Play in Western Asian Chess Championship 2019
• One of my students, Aarav Nambiar secured Asian schools 8th in classic and fourth in Blitz in under 7 categories in 2017. He also has his Elo rating 1198 and got Arena Candidate Master Title
• Have Conducted a chess coaching camp at Super champ’s academy, Dubai in March 2017, Where 100 students have participated in all categories of the camp.
• Have produced many Fide rated players Vyshanavi, Godhani Mahart, Nityashri Sankaran, Arueran Raghuraman, Jay Bhavik Shah, Deep Bhavik Shah, Aarav Nambiar, Mahika Vallabhaneni, Harshal manigandhan, Neil reddy, Nikhil Reddy, Nidhish Seelavath Math, Mridul Ashokan. All these students are getting trained by me online and from the academy.
• Was Successful in making students understand the importance of diet and physical activities are important for a chess player and making them follow the diet plan.
• All most all categories leading students from UAE are personally trained by me.

Experience as a Player

We have a total of 1 review(s) for Saketh.

Absolutely great and well-trained teacher. I have seen such an improvement in my son`s chess ability in just 2 weeks! I would not hesitate to recommend Saketh, and I have already begun recommending him to my friends and family.