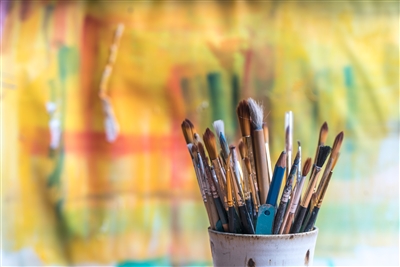 A teacher from Alperton Community School in Brent has made the claim that art can help vulnerable young children avoid a lifetime of gang crime. Ms Zafirakou, teacher of art and textiles has said that arts subjects can guide children away from a life of knife and gang crime. Given the spike in both gun and knife attacks in London this year, her claim is a topical one, and certainly worth investigating.

Ms Zafirakou voiced a cautionary note, saying that if funding to the arts are cut, and children are restricted from studying them, it could have dire consequences for both their mental health, and physical safety.

She went on to say that after school art classes at Alperton have been instrumental in helping children be safe, both by keeping them off the streets, and giving them the confidence to see a different future than just one involving crime.

`At Alperton Community School in Brent we have faced many challenges in combating the disenfranchisement that can render children susceptible to gang culture.`

Many forms of art have been used as a form of therapy. Music especially has been thought to have a healing influence at least as far back as the Ancient Greeks. Pythagoras expounded the healing properties of certain musical intervals (such as the octave, perfect fifth and perfect fourth); and the writings of both Plato and Aristotle discuss the effect of music on human behaviour.

Therapy through the medium of painting - commonly known as `art therapy` is a growing field, and though less developed than music therapy, it is increasingly being recognised as a pursuit that can engender numerous health benefits. Writing has long been recognized as a method to alleviate mental stresses - the theory being that the act of writing down troubling thoughts can help the patient realise - clearly and distinctly - exactly what is causing them distress. Rather than a nebulous mass of vague concerns, they can express and distill certain sentiments that they perhaps couldn`t face up to. Putting the words down can be a cathartic precess, while seeing them on the page (or screen) in front of them can be a way of isolating, and focusing on the problem.

Ms Zafirakou goes so far as to express the view that art can be used to build confidence, and help guide students away from the path of crime.

`Arts subjects help children to clarify their ideas what is right and wrong? Who am I? What is my identity?`

Only this week the government has announced that they will be supplying £96 million to support talented drama, music and dance students. The arts have already seen a huge investment over the last two years, and this additional pledge will increase the total funding to £496 million since 2016. Despite this substantial funding Ms Zafirakou has said that the money will have only peripheral impact upon the lives and education of `ordinary pupils` who previously only had limited experiences of the arts.

Last month Ms Zafirakou was named the `World`s best Teacher` - collecting a cool $1 dollars in Dubai. It is the first time an UK teacher has won the much coveted title. She has said that children in her area face many complex challenges, which include street violence, and being recruited by gangs. The school where she teaches is cosmopolitan indeed, and has pupils that speak over 35 languages.

She has expressed the view that studying art can help children`s mental health, saying in an interview:

`These subjects are very challenging but quite relaxing. Students can get lost in them. They don`t want to leave the classroom because they are lost in the journey of their own art form. I see that as therapy. It helps them disconnect from their troubles and be in the moment.`

`They are constantly stressing about what`s on social media, what will happen on their way home or when I put the key in the door, who will be there, is there food? For once they feel a sense of calm and peace.`

I believe the arts have a vital place in today`s society - but if we want a nation of adults who can both appreciate, and contribute to the artistic scene, they must be introduced to the subject as children. Many people consider the arts to have little or no value beside more academic subjects - but great music, literature and painting can ratify our humanity, and let us feel the presence of, and sympathize with, another human being, who may have lived hundreds of years ago. When Churchill was asked to reduce the funding going to the arts during World War II, he responded `Then what would we be fighting for?`