Should all exams be taken and submitted using computers? 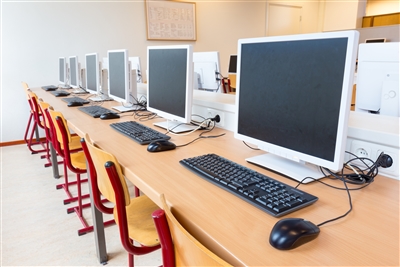 A friend of mine is a university examiner - she works for OCR (Oxford, Cambridge and RSA Exams). My understanding was that her job entailed compiling the papers: writing the questions, and making sure that the tests were comprehensively balanced. It turns out though that she has a far more onerous task: she has to mark the exams.

`How hard can that be?` I thought to myself? She`ll obviously know what the answers are, she just has to read through each paper and grade it accordingly. I recall asking her if the most difficult part of her job was deciding just how many marks to award a student in a comprehension question, where there isn`t a clearly delineated right and wrong answer.

`No, she answered, `The most difficult thing is trying to read students` awful handwriting!` It turns out this is the most common complaint from examiners - they have to decipher hundreds of pages of handwriting, with each student having their own idiosyncratic style of writing. My friend went on to tell me some of her concerns:

`Some students have the most beautiful handwriting - while others have such a poor script it makes my eyes hurt! However bad their writing is, I`m obliged to decode it all. It`s not their penmanship that`s being tested - though sometimes the writing is so bad, almost completely illegible, I want to cross it all out and give them no marks at all!`

`As the student nears the end of the exam, and time is running out, their writing becomes even worse, as they write faster and faster! I have to make sure i`ve read every line, however enigma-like it may be to decode, as it wouldn`t be fair to a student to gloss over words that might contain the correct answer.`

Our current students may well be the last generation who sit examinations using paper and pen, for there are calls for all assessments to be undertaken using computers. There is really no reason why students can`t log into a web site that hosts the exam, and type out their answers, while sitting in a traditional examination hall. The examiner won`t even have to tell students to stop writing at the end of the examination, nor collect their papers once the assessment has concluded.

There are many benefits to this method: the questions can be uploaded to the website on the day of the exam, negating the need for hundreds of confidential papers to be stored on school grounds days, or even weeks before the test. There won`t be any more cases of exam papers being stolen and distributed to students before the test, something that frequently happens according to my examiner friend; nor that of completed papers being lost prior to marking, something that also sadly occurs.

Many people might balk at the idea of equipping students with computers during exams - while mobile phones are banned from the examination room, computers could be used with even greater facility to access the internet, allowing that elusive answer to be acquired. I suspect it wouldn`t be particularly difficult for schools to set up computers that are disabled in some manner, so they can`t access any Wi-Fi signal, so this is a concern that could likely be alleviated.

There are some schools which have for some time mandated that students submit their answers on computers during exams, and I am not aware of any issues being raised. One concern that comes to mind however is that of questions that require an answer in the form of a picture or diagram. Certain questions in geometry or geography might rely upon a picture being submitted by the student, or a presented image being altered in some manner. I suspect this is not really a major problem though - computers are used by graphic artists every day, so it should be perfectly possible for the student to draw, for example, certain geometric shapes, or mark the border between two countries using a mouse.

Exams submitted via computer could also provide some useful information to exam boards: they could track how long students take over each question, allowing them to assess the difficulty levels more accurately, helping them create new tests in the future. There will also be an environmental benefit in the reduction of paper use. Exams will be able to be graded faster, and more accurately, and my friend will be spared the punishment of having to decipher reams of spidery, hieroglyphic-like writing!