Class sizes on the rise in most secondary schools 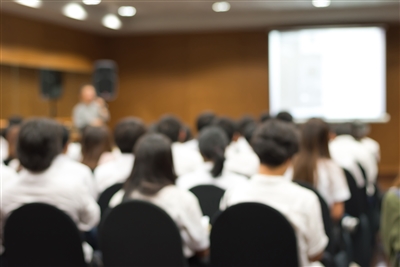 When I was a pupil secondary school, way back in the 1980`s, I believe there were at least 30 of us in every class. My surname meant that I was usually assigned to sit at the back of the room, and I can still remember the swathes of pupils stretched out in from of me, all of them paying attention to the teacher, whom I could often barely hear. I seem to remember one of my classes had as many 35 pupils in attendance. By today`s standards this would probably be seen as untenably large, and there would be complaints that a single teacher couldn`t possibly hope to keep order, while also at-tending to the needs of all the pupils.

The Department for Education has recently issued figures, which reveal that the average secondary school class size in 2017 was 20.8. I have to admit this figure astonished me - I had no idea that classrooms had recently become so `sparsely populated.` Of course it can only be a good thing - when I was a pupil we found it fairy easy to get up to all kinds of mischief during lessons, confident that we would evade teacher`s surveillance, there being so many of us.

It seems however that classroom sizes may be on the rise - education unions have conducted a re-port suggesting that two thirds of secondary schools in England have significantly increased their class sizes in the last two years. Their findings show that, while many areas have remained un-changed, places such as York have seen classrooms grow by an average of three pupils.

The Department For Education has contradicted these findings, claiming the figures are flawed, and that average class sizes haven`t changed since 2010. The response of the education unions has been that certain areas are being subjected to unacceptable increases in classroom size, citing Barnsley, Rutland, Newham, Thurrock, and Leicester as those most affected.

The reason for these increases seems to be, as one would expect, lack of funding. The current re-cruitment problem in teaching, combined with 44% of new teachers leaving the profession within five years, and a failure to build enough new schools, means it`s inevitable class sizes will grow. Larger classes are not only more difficult for teachers to control, but there`s also more paperwork - more marking and more student repots, onerous tasks that every teacher has to contend with.

The general secretary of the Association of School and College Leaders Geoff Barton, has warned that, due to funding constraints, schools will have no choice but to increase their class sizes.

`It is the last thing they want to do but they have no other choice because they have to reduce staff-ing numbers and that inevitably affects the teacher-to-pupil ratio. Larger classes mean less individu-al support for students, and put more pressure on teachers at a time when we desperately need to reduce workload.`

In December Labour made a pledge to keep class sizes capped at 30 pupils, promising to recruit more than 20,000 teachers. Given the current recruitment crisis, it is by no means clear how they would achieve this. Of course the problem with some schools could be that they are simply too small, with not enough classrooms to facilitate simultaneous lessons with numerous smaller clas-ses.

I have always been of the opinion that class sizes are of less importance than the quality of the les-son being presented. As long as the teacher can captivate his `audience` and hold the attention of the classroom, then it is of minor importance how many pupils are actually in the class. A bad teacher will not even be able to engage the attention and interest of a single pupil, while a good teacher should be able to present a captivating lesson to more than 30 pupils. It is of course not un-usual for lecturers at university to have a hundred or more students in their classes. Being (one cer-tainly hopes) more mature and attentive to their studies, there will admittedly be less demands upon the lecturer to ensure the students are behaving - but they will still have to deliver an engaging les-son to a larger number of pupils than would be assembled in any secondary school.