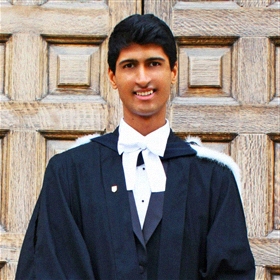 
one to one
All rates listed here go directly to the tutor - we don't charge commission for this tutor.
Rates summary: Ł45.00 to Ł55.00 per hour

I graduated from Cambridge University in 2013, having done pre-clinical medicine there, I came 14th in my year. I also completed my medical degree at UCL medical school in 2016. I am now a practising junior doctor.

I also spent a year at Harvard Medical School, both as a medical student and conducting clinical research at Massachusetts General Hospital and the other schools associated with the medical school.

I can offer tutoring in Biology, Chemistry, Maths, Further Maths, and History up to A-Level, and biology and medicine at degree level.

I have vast experience with university applications for medicine, and more generally, both to Oxbridge and to other schools in the UK as well as the US (including Harvard and the other Ivy`s) - I have been doing this for the past 6 years, and have been part of the interview process.

I am highly committed and driven, and have extensive experience tutoring, as I have done it at various agencies over the last 6 years, mainly to earn the money required for my stint at Harvard Medical School. I am also extremely approachable and social, playing many team sports.

I live in North London, but am willing to travel anywhere in the London area accessible by tube.

Published papers at both Harvard Medical School (first authorship, 2014), and at Cambridge University.

Honours degree in Medicine and Neuroscience from Queens` College, Cambridge University, with First class honours in Biochemistry, Neuroscience and Physiology. (2010-2013)

Experience: In the last 8 years I have tutored GCSE, AS, and A2 level students in Biology, Chemistry, Maths, and History at a tutoring centre near where I live whenever possible (holidays etc. when I used to be outside Cambridge term times). I have also tutored medical students in their first few years.

I also academically and pastorally mentored boys lower down the school while in sixth form, particularly those who are struggling academically, showing willingness to help, compassion, and an ability not only to communicate, but to teach. This was a scheme I was hand-picked for, and only 5 of my year were selected and considered capable and appropriate for the role.

I was also asked by my Director of Studies at Cambridge University to consider returning to Cambridge to teach the undergraduates as a supervisor after my medical degree, so I feel that I am very well equipped to tutor any of the material listed above.

Contact this Tutor
Feedback For Debayan (1)
We have a total of 1 review(s) for Debayan.

I think he is very good at tutoring and he has a lot of knowledge.