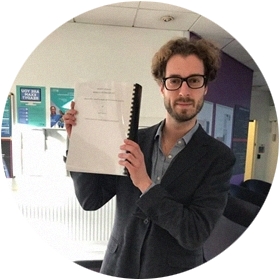 I am a dual citizen of the United Kingdom and Germany, my heritage is a mix of Greek and Swedish, and I spent most of my childhood in Spain before I moved back to England to attend university. I received my Bachelor`s and Master`s Degrees in English Literature at the University of Southampton, and it was while doing my PhD at Brunel University that I discovered my passion and talent for teaching. While at Southampton I was involved in creating theatre and film, but today my main focus is on my writing. I`ve written a critical biography of the American author Norman Mailer, and am currently developing further works of literary and cultural criticism alongside my first novel. I also blog regularly on Medium.

Experience: I have been lecturing in English Literature at Brunel University, where I received my PhD, since the 2015-16 academic year. I have been offering private tuition in various capacities since I was a teenager. I have received consistently positive feedback from the groups I`ve taught at university, and have had successful results with my private students since focusing on tuition in the last couple of years. I am also a nationally-published writer whose book reviews have appeared in The Guardian and Prospect Magazine. I have run sessions on writing technique at my university.

Recently, an MA student at Birkbeck whom I have coached in writing technique received a Distinction for both essays that they wrote in the past year, an A Level student of mine got a place on the Classics & Philosophy BA of their choice, and a GCSE student showed considerable improvement on his English mock exams. In addition to English I have also tutored in Religious Studies and French Language (GCSE) as well as History, Classic Civilisation, and Philosophy (A Level). I am familiar with the AQA, OCR, and EdExcel syllabi, as well as the skills required to thrive in a university setting.

I have an Enhanced DBS Certificate, dated March 16th of 2020. I am signed up for the update service.

• Recipient of Sue Wilson Scholarship
• Awarded mark of 86 for dissertation

A Levels in English Literature, History (A), Spanish Language (B), French Language (C)

We have a total of 1 review(s) for Alexis.

Alexis is a great tutor for my 13 yr old son.