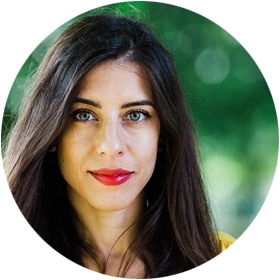 I`m a linguist, musician, actress and physical performer. I was born and raised in Greece and lived for eight years in Germany before moving to the UK, where I`ve been based since 2010. I hold a PhD in Cultural Studies with a thesis discussing the combination of arts in film and the concept of the Total Work of Art (Gesamtkunstwerk), a First-Class Honours degree in Greek Philology and Linguistics, an MA in Acting and a PGCert in Physical Theatre. I have also undertaken studies in singing/music and dance in various institutions in the UK, Germany and Greece. I work as both a freelance linguist and a performer, merging my multicultural and multidisciplinary influences into personal forms of expression and creativity, including writing, song-writing, photography and filmmaking. I`m ever intellectually and artistically curious and always learning. I believe in the importance of education and culture in making a difference in the world.

Experience: I have been teaching one-to-one Greek, English and German since 2012, for all levels and ages and for businesses. I have been a translator since 2004 and have translated campaigns among others for Fujitsu, Deutsche Bank, Mercedes-Benz, YouTube, L’Oréal, Hasbro. I also teach piano and music theory for all ages since 2015 and I have led various movement courses for drama students, teens and toddlers! I`m an experienced performer and have worked as an actress, singer and voice over in the UK and Germany.