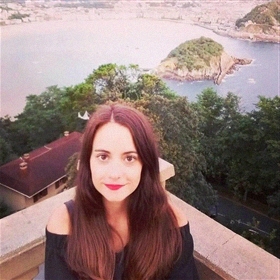 
one to one
All rates listed here go directly to the tutor - we don't charge commission for this tutor.
Rates summary: Ł20.00 to Ł30.00 per hour

My name is Marta and I am from Granada (Andalusia, Spain).

I am a native Spanish teacher living in Leeds (West Yorkshire, England) for four years now.

I have an extensive experience teaching Spanish as a foreign language or a second language or working as a Spanish language assistant not only in Spain but also in Yorkshire (England).

Availability: I offer lessons at all levels and of all ages so if you want to learn Spanish and Spanish culture, pass a DELE exam or you need some help or support with your Spanish studies at uni as well as for specific purposes as a professional (Medical Spanish, Diplomacy or Business, for example), contact me :)

-Supervisor during English exams at the Cambridge university + Workshop at the International House Madrid (Madrid, Spain).

I have found Marta to be very well organised and attentive. She has been flexible with lesson times which has been very helpful. She initially spent some time identifying my level and then finding areas to improve upon. She has also been happy to tailor each lesson to specific topics I am interested in. I definitely feel my Spanish has improved since starting these lessons and would recommend them

Marta is a very pleasant and friendly tutor. She is very encouraging when I am struggling, and is also flexible in terms of time and location of the lessons. I would definitely recommend her services to anyone wanting to learn Spanish.