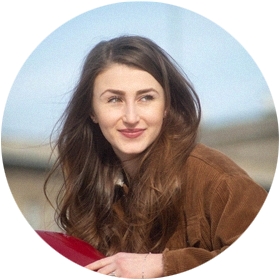 I am a musician living in London. Educated in violin performance, I play in orchestras and numerous chamber groups. I am interested in composing for films and video-games, mixing electronic sounds with self-recorded acoustic violin and vocal tracks.

I graduated in both violin and vocal studies at the Artur Malawski Music School in Przemyś;l. Later on, choosing violin performance as the main core of my musical education, I studied at the Academy of Music in Cracow. My recent education includes doctoral studies at Warsaw Chopin University of Music with prof. Janusz Wawrowski and an Artist Diploma Course with prof. Louise Hopkins at the Guildhall School of Music and Drama in London.

Pure affection to chamber music has brought me to take part in many projects such as the Southbank Sinfonia Quartet at the Royal Opera House in London, recordings for BBC Radio 3, films and documentaries. As part of my own research of a unique sound and repertoire, I have been playing with harpist Oliver Wass a selection of works by Ravel. These include Sonata no.2 “Blues”, Tzigane and others, where the piano part has been performed by the harp. Previously, I had undertaken a similar project with percussionist Maria Chlebus, where works for violin and piano by Pärt, De Falla, Lutoslawski and other composers were performed with the marimba. My experience in singing includes London Contemporary Voices, Baroque d’Auvergne Festival, Krakow Opera Choir, Oktofonia Ensemble and recording sessions.

In 2020 I decided to learn about film composing and I successfully applied to the National Film and TV School in Beaconsfield for a master course in composing for screen, recording all the violin, vocal and electronic parts in my music. I love living my life, constantly experimenting with its direction. I genuinely enjoy the time which I spend with my violin students (aged from 6 to ~70yo) and eating milk chocolate with salty crisps… :)

Experience: Over the past years, I have approached music education from both a theoretical and practical point of view. During my time at the Guildhall School of Music and Drama, I attended the Teaching Skills Course. It helped me to understand the many mechanisms of performer’s thought processes and, consequently, to adjust individual teaching method to every student. In 2016, being a member of Southbank Sinfonia enabled me to gain experience working with instrumentalists, mentoring young musicians at Glyndebourne, Vaughan Memorial School and Thomas`s Battersea School. I also graduated from Pedagogical Studies at Academy of Music in Cracow (2014), which included Psychology, Pedagogy, Didactics, Voice Projection, Violin Teaching Methods and Internship at Music School as a Violin Teacher.
Among my recent teaching experiences, I gave masterclasses at the Krzysztof Penderecki European Centre for Music, working with musicians of the Penderecki Youth Orchestra. During the same period, I taught musicians of the NOR59 Strykeinstitutt Orchestra in Oslo. Since 2018 have been tutoring violin students at the Warsaw Chopin University of Music as a part of my doctoral studies. Recently I have been selected to be an Ambassador with the Benedetti Foundation in London.