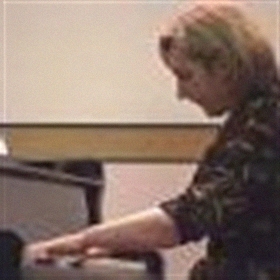 We have verified this users DBS
How references rated Marina


one to one
All rates listed here go directly to the tutor - we don't charge commission for this tutor.
Rates summary: Ł52.00 to Ł65.00 per hour

The focus of my teaching practice is to help pianists to enjoy all aspects of their playing performance. My belief is that we can play better and express our musicality to the full only when the mind and body is free of tension.
I work on increasing the technical abilities of each student whilst enhancing their musical memory, creating a deeper understanding of various piano music styles and their particular techniques. Creative listening and thinking are actively encouraged.
I am an award-winning classical pianist, experienced piano educator and lecturer, specialising in preventing occupational injuries in keyboard players and promoting various piano and other techniques to help the performer. My piano teaching methods are based on concentrating in solving the most difficult problems in piano playing as well as working on power of mind. I have over 30 years of experience in teaching junior and adult pianists, from beginners to highly advanced music professionals. My students have a very high passing rate of various piano examinations in the UK, including LRSM and FRSM diplomas, and they perform regularly at piano competitions, with many of them winning awards and prizes.
As a classically trained pianist, I have given over 300 piano performances across the UK and Eastern Europe.
Additionally, I have established the London-based competition Around the Globe Piano Music Festival since 2014.

Experience: During my long standing pianistic career, I have played many recitals and hundreds of performances around UK, Balkan States and other Eastern European countries. For over 30 years, I have been teaching successfully in various music institutions and privately, from beginners to advanced, in London and Belgrade. My courses for advanced piano students as well as music professionals include Advanced Piano Solo Studies, Piano Methodology & Pedagogy, Masterclasses in Accompaniment and Piano Recital Programmes.

I have launched my piano career at a very early age in Belgrade (Serbia) while studying at Stanković; School of Music and made her debut playing solo recital at Kolarac Concert Hall, in 1969. As a child prodigy at the age of eight, I won 1st Prize in the Federal Competition for Young Pianists. My first success was followed by numerous appearances on national TV and Radio as well as performing across Yugoslavia and Eastern Europe. After winning many national competitions and festivals consecutively for nine years, I was awarded by the Yugoslavian Government a five-year scholarship to continue her studies in the U.S.S.R. at the famous Moscow Conservatoire P.I.Tchaikovsky in 1979.

Coming back to Yugoslavia in 1985 I continued my postgraduate solo studies at the Belgrade Academy of Music where I was trained as a teaching assistant in Prof. Lazko’s piano class. During this time, I continued performing solo recitals, chamber music, orchestral concerts, and working with opera singers playing throughout the country. I was also active in promoting contemporary Yugoslav music and other Eastern European composers. In addition, I held regular masterclasses in piano technique and performance, and successfully prepared many students for national and international competitions. As a result, my reputation as a piano teacher grew outside of Yugoslavia and I was invited to London in 1987 to privately tutor several students from the Purcell School of Music where they won the highest scholarship prizes.
Having moved to London in 1989, I continued my solo and accompanist career as well as teaching piano. I continued to perform in major concert halls across the UK and in Europe, playing in many countries including Russia, Ukraine, Norway and the Balkan States. I have also made many recordings of Russian composers such as Tchaikovsky, Prokofiev, Rachmaninov as well as Bach, Mozart alongside other contemporary music.
I have taught piano extensively in various music schools, up to postgraduate level in London and Watford since 1990. I am currently working as a piano tutor at Watford School of Music in addition to my numerous private students teaching from home. In the last twenty years, I have frequently given masterclasses and workshops where i have demonstrated my piano teaching methods, concentrating on piano technique and power of mind. I have been focusing on solving the most difficult playing technique problems and discomfort while playing, preventing pianists from suffering occupational injuries. In addition, I helped many musicians who already suffered with problems while performing for more than two decades. Consequently, I have joined the International Society for the Study of Tension in Performance (ISSTIP) in 1998, where I have been working closely with late Professor Carola Grindea (founder of EPTA, ISSTIP and Beethoven Piano Society of Europe). Through this organisation, I shared my knowledge and personal experiences with other musicians and medical experts who specialise in preventing any type of musician’s problems and physical injuries, in children and adults.

In 1998, I obtained an MA in Music (Performance Studies) from City University and was awarded the Sir Jack & Lady Lyons Performance Scholarship. Since finishing my Masters, I have continued to widen my musical interests. I was the founder of an arts company, the New European Music & Arts Movement (NEMAM) in 2000, whose aim is to promote the alliance of various forms of arts organising events that combine music, visual arts, film and acting. Their emphasis is on the development of young artists by organising exhibitions, concerts, productions, tutorials, seminars, courses and workshops, presenting and promoting contemporary artists as well as rediscovering works by distinguished composers and artists.

Apart from my teaching and performing careers, I established myself as an organiser and promoter of musical events, gaining rapid popularity on London`s music scene. Furthermore, I have been also supporting ISSTIP’s charity work as Vice Chairman including my work as Co-Chief Editor of ISSTIP Journal as well as their Secretary for more than a decade. Currently, she is managing director of the Around the Globe Piano Music Festival and is doing the main editorial work on its yearly magazine as well as festival’s blogs.