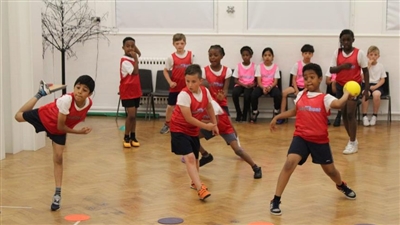 This is now the second academic year that Tutor Hunt has been providing sponsorship to schools in North London. It has paid for a sports coach to give year seven students at three schools - Woodcraft Junior, Goldbeaters, and The Orion - weekly lessons in the game of Dodgeball.

Many people will be unfamiliar with Dodgeball - it is certainly not one of the more traditional games played at schools in England. It has been popular in America for many decades, but only in the last few years has it started to be played in European schools. To anyone watching a Dodgeball game for the first time the rules seem very simple - and very action packed! Two teams of equal number (usually around ten players) each have their own sides on the pitch. No player is permitted to cross over into the enemy`s side, and each team starts with an equal number of foam balls.

The aim of the game is to strike the enemy players out by throwing a ball from your side. Head shots are not allowed, and the ball must strike the player without bouncing off the ground to get them out. Players will strive to `dodge` the projectiles being hurled at them from the opposing team, while collecting ammunition to throw back at them. The foam balls themselves can be used as shields to deflect incoming fire. One hit though, and you are out! relegated to the benches, where you cheer on your team!

Teachers will be observing if anyone gets hit - if they say you`re out, then you must go to the sidelines, and hope your team can win without your help! The games are played fast - four minutes, and then the teams change sides, standing at the other side of the pitch. Such is the frenetic pace of the game though, a team can easily be obliterated before time out has been called.

Children don`t just benefit from the immediate cardio vascular workout a game of sport induces - ; they learn valuable social skills, such as teamwork and strategy. The sense of pride and exhilaration scoring a goal or winning a touchdown can bring is a sensation rarely to be found in the classroom. Any kind of regular exercise undertaken by children on a regular basis has has also been shown to potentially lead to a good exercise regime later in life. 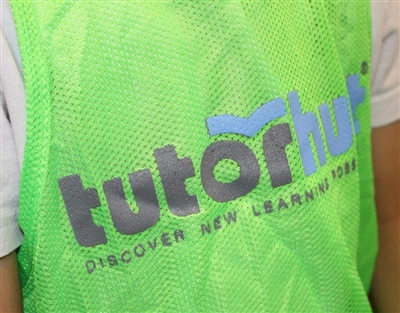 The NHS has issued the guidelines that `to maintain a basic level of health, children and young people aged 5 to 18 need to do at least 60 minutes of physical activity every day this should range from moderate activity, such as cycling and playground activities, to vigorous activity, such as running and tennis`

What about children who aren`t particularly good at sports though? The problem with the more mainstream games, those traditionally played in schools, such as football, rounders, or cricket, is that they tend to be dominated by the children who have a natural affinity for them. Dodgeball is a fairly new game, and as such it gives every child to opportunity to make significant contributions to each tournament.

John Underhill, a member of Tutor Hunt, visited Woodcraft Junior School on 19th January, where the pupils of the three schools: Goldbeaters, The Orion, and Woodcraft themselves, where playing for the Dodgeball Trophy. Back July of 2016 Goldbeaters were victorious, taking the title from Woodcraft. Would the home team be able to reclaim the trophy?

A trainer from Challenge Sport Education told Mr Underhill that the game of dodgeball `was a really good game for building teamwork skills and confidence,` and that `before Tutor Hunt provided sponsorship none of the children had ever played it before. Because it`s new there are no players who are going to dominate each game, which is often what happens in games the children are more familiar with, such as rounders or football. With everyone starting from an equal skill level each child has the chance to excel. It is of course a team game, so it encourages players to work together, helping them to build communication and organisational skills.`

`And also courage!` said Mr Underhill, who remembered previous games where a lone contestant was often left dodging a barrage of projectiles launched from the other side.

`Yes, that too certainly! Being the last player standing in a game of dodgeball can be a fairly daunting experience, especially if the opposing side has a large number of team members left. It`s certainly not a situation I`d like to be in!`

Both Craig Talon, the Headmaster of Woodcroft Junior, and Catherine Jones from Goldbeaters expressed how much the children enjoyed and benefited from playing Dodgeball. Watching them play certainly showed how committed the children were to their teams, and how determined they were to bring victory to their school. After a number of playoffs though, the trophy returned to the home side, Woodcraft Junior!