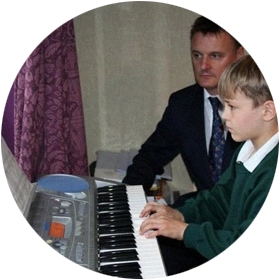 Lesson Information : The lesson can be arranged to take place at the home of the student if desired. Travel costs will be considered at the time of the enquiry.

I consider myself a lively, energetic and conscientious professional who strives to bring out the best in people and situations. My personality is outgoing, friendly, courteous and respectful. I have a high tolerance level in all circumstances and I adapt my humour in order to produce positive responses.

My musical career began in the Band of Her Majestyâ€™s Scots Guards.
I was trained at the Royal Military School of Music, Kneller Hall, prior to performing at all major military and civilian venues including Buckingham Palace, the Royal Albert Hall and in radio broadcasts. On leaving the Scots Guards in 1976 I worked as a freelance musician from a London base. During this period I taught brass for the Inner London Education Authority as well as performing, conducting and arranging music in many different situations from orchestras to cabaret.

I graduated from Salford University with a Bachelor of Arts and then gained my Postgraduate Certificate in Education in 1994. I have worked as a Head of Music in England, Poland, Italy and Kuwait City during which time I also taught English as a Second Language. In 2005 I increased my work as a private tutor and began my own music business.

I moved to South Devon in 2008 and am available as a private home tutor within 15 miles of Plymouth.


Availability: Flexible availability for general subjects in all key stages and ages as well as musical instrument tuition.

Experience: Musical instrument teaching from 1976 both privately and for Inner London Education Authority. Secondary school music teaching from 1994. Head of Department from 1996 including International schools in Warsaw, Kuwait and Turin where I also taught EASL to primary age students. Own private teaching business in Buckinghamshire with supply teaching for various school agencies from 2002. Moved to Devon on Nov 1st 2008 due to partners job relocation. Currently working as teacher for PYMS, Widey Court Primary school and privately.

This user has a total of 7 images, view them all in their Photo Gallery .