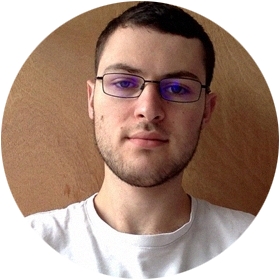 I can offer tutoring in Biology, Chemistry and Maths up to A-Level.

I graduated with a 2:1 in Natural Sciences from Trinity College, Cambridge, where I specialised in Chemistry.

I am now a graduate medical student at UCL.

I took a gap year from September 2013, during which I spent 9 months doing an unpaid internship in cancer research at the Blizard institute, a genetics research laboratory in Whitechapel.

From August 2017-May 2018 I worked as a research assistant with a group at Imperial who are interested in the genetics of infectious diseases. My work there involved lab work as well as bioinformatic analyses and presenting any interesting findings.

I am a competent Russian speaker, having studied it at A level and having travelled to Russia.

I am proficient with the programme and programming language ‘R’, having used it for data analysis during my time at the Blizard Institute and Imperial.

I am also happy to help with university applications for any science subject, both to Oxbridge and to other universities in the UK

I am a keen musician – I play the violin and trombone in various ensembles, including orchestras, chamber ensembles and big bands where I play lots of different styles of music. I listen to lots of classical music and attend lots of concerts in London.

I am also a keen football player, having played for my school’s first team and playing for my college’s first team. I am also an avid supporter of Chelsea Football Club, and attend matches when I can.

Experience: I have tutored GCSE, AS, and A2 level students in Biology, Chemistry and Maths.

I also academically and pastorally mentored boys lower down the school while I was in sixth form, particularly those who were struggling academically. This was a position for which I was handpicked.

Sam is a very reliable, intelligent and hard-working Chemistry tutor for my son as well as a future medical doctor who went to the most prestigious schools in the UK. I can say that he is always punctual, gentle, patient and most of all, thoroughly prepared for the lessons, ready to pass on his knowledge to my son. I consider his strength is his well-roundedness in all the areas of Science, owing to his BSC subject at Cambridge; Natural Science, which means, he is not only specialised in Chemistry and Biology but also Physics and Maths. Indeed it is my joy to see my son restoring his confidence especially in Science, since he knows that he has a tutor to go to and ask whatever he doesn`t understand, when there is hardly enough teaching & effective learning going on in the classroom at his school. Thank you so much, Sam. From Sunny