Yun-ying has disabled his/her profile. You can not contact this Tutor at this time. 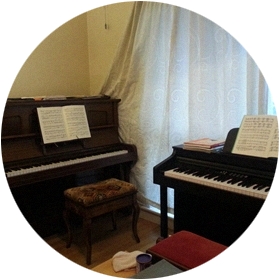 Experience: Before moving to the UK, Yun-Ying had performed the piano at various venues and regularly played in the Taipei Medical University Hospital as a volunteer pianist in summer holidays. She won the Taipei Municipal Zheng Junior High School piano accompaniment prize.
Yun-Ying was awarded scholarship and studied BMus (Hons) and MMus in Birmingham Conservatoire . During her education in the UK, Yun-Ying has been involved in many performance activities in and outside of the conservatoire as a soloist, accompanist and chamber musician. She was the finalist of Birmingham Chamber Music Society Sylvia Cleaver Prize as a member of piano trio.
She was awarded the certificate of Piano Teacher Training Course at the VCA Music, Faculty of the Victoria College of the Arts, The University of Melbourne.

Yun-Ying is a native Chinese/Mandarin speaker.During her study in Taiwan, she got full mark of Chinese writing subject in The Basic Competence Test for Junior High School Students, hosted a school talent show and won the Chinese Elocution Competition.