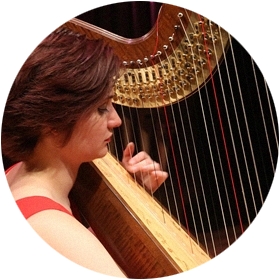 Anna has more than 4 years of experience as a harp and language teacher, both in private tutoring and as a former teacher in the CEM Maria Grever Music School, in which she taught two years. Anna also has experience giving catalan and spanish lessons.

Award-winning harpist Anna originally studied at the Conservatori Municipal de Música de Barcelona with Maria Lluïsa and in 2013 she gained a Bachelor Degree in Music Performance with Honours at the Conservatorio Superior de Música del Liceu, studying with Abigail Prat. In 2015 Anna graduated with Honours from a Masters Degree in Performance at the Royal College of Music where she studied with Professors Ieuan Jones, Rachel Masters and Daphne Boden she is currently studying an Artist Diploma course in Contemporary Solo Performance with Professor Ieuan Jones and Sioned Williams, Principal Harpist BBCSO. She has received numerous awards and generous support, most notably from the Leverhulme Award, Stanley Picker Award, and the Agustí Pedro i Pons Foundation Scholarship, and she is currently being supported by the charity Talent Unlimited.

Anna has experience as a soloist, chamber and orchestral player from a very young age, and has performed in corporate and special occasions both in Spain and the UK. She has toured Spain as a winner of the Concurso Permanente de Juventudes Musicales de España (JJMM), participated in numerous music festivals and projects such as the “Festival Internacional d’ Arpa de Sentmenat”, and performed in renowned venues such as the V&A, BBC Maida Vale Studios, Cadogan Hall, Royal College of Music, the Spencer House, Italian Embassy, Austrian Cultural Forum, amongst others. She has also worked with several orchestras including the BBC Symphony Orchestra (BBCSO Pathway Scheme).


Availability: Willing to teach during both weekdays and weekends.

Experience: I have been teaching several subjects as a private during the last six years, and harp from the last four. Have been working for two years in the music school CEM Maria Grever, both as a harp and aural teacher.

Also, I have been giving private spanish and catalan lessons during the last two years.

All roads lead to Rome...! And every student is different. As humans, we all have distinct qualities that make us unique (both mentally and physically wise) hence, while my teaching method is strongly based in harp technique, it tends to mutate and adapt to every student. I honestly do not believe I have ever taught a piece or a scale the same way twice, since everyone has their particular way to overcome difficulties (even if they do not know theirs yet and I have to help them find out), their individual and irrepetible musical talents, different ways to analyse what their eyes see on the paper, and even a personal way to understand a simple dynamic.

This user has a total of 3 images, view them all in their Photo Gallery .

We have a total of 3 review(s) for Anna.

Very good and easy to deal with and very flexible.

Anna was very communicative and welcomed my daughter and myself for a trial harp lesson. Anna was very kind and patient with my daughter and taught her to play a short piece of music on the harp using both hands. I would recommend Anna to teach beginners how to play the harp.

Anna is a nice and patient tutor who is always nice to me. As a new beginner, her instruction has made me improve a lot and she is always willing to answer my questions all the time. Frankly speaking, she is both a tutor and a friend who helps me so much. She gives me confidence and make me love harp more. Besides, her professional skills impressed me so much.