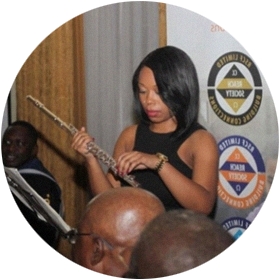 She has also had lessons with Matthew Brailsford, Elizabeth Walker and Rowland Sutherland she also attended the prestigious Oxford Flute Summer School (2011) where she studied with renowned flautists Janet Wye and Peter Lloyd, and various others. She has also attended workshops led by Ian Clarke.

She has entered several competitive musical festivals around the country and successfully won cups, numerous gold and silver medals and high commendations. She has often been asked to play as a soloist in various events including the launch for the Olympic bid for Brent Council at Wembley Stadium.

Availability: Tuesday,Wednesday and Thursday from 4
Flexible but limited spaces on Saturday

Experience: â€¢ 2009 June: Worked for a week in year 2 class at Preston Park Primary Where I monitored their progression levels, did duties for the teachers and read to the children as well as help them with various tasks given by the teacher.
â€¢ 2013 July: Acting as a student helper on the Brent Music Concert bands tour to Belgium and Germany. The kids ages ranged from 10-16. As a student helper it was my job to oversee the children to bed every night and make sure they were in the correct rooms, I also had to help with the checklist and was given my individual group along with an adult teacher and another student helper.
2015 onwards: Currently teaching music at a secondary school in Brent.